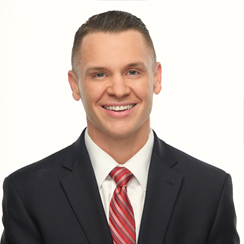 Attorney Mathew A. Work is the founding partner of Carlson & Work and is widely regarded as one of Nevada’s top attorneys. Mathew A. Work was born in Henderson, NV where he was raised by his single mother and grandparents.

Mathew passed the Nevada bar on his first attempt and accepted a position as an associate attorney where he successfully defended criminal cases at jury trial.

As a result of his work efforts, Mathew was then offered a position as a criminal prosecutor for the City of Reno. This experience was invaluable. Mathew spent years actively litigating criminal cases at trial. Mathew founded Work Law, now Carlson & Work in 2017.

Mathew’s ability as a trial attorney has consistently earned praise from the Northern Nevada legal community. In 2017, 2018, 2019, and 2020, he earned recognition as Top 40 under 40 nationally, voted by the National Trial Attorney LLC. Mathew was also named Top 10 Trial Attorney by the Nevada Trial Lawyers Association. In 2020 Mathew was awarded Nevada Attorney of the Year by Top 100 Registry Inc.

Mathew has also been appointed by Reno Mayor, Hillary Schieve as Mayor Schieve’s personal adviser for the Reno Charter Committee. Mathew has also served as General Counsel to Professional Sports Representation where he operated as legal counsel to NFL Head Coaches and General Managers.

In addition to practicing law, Mathew is a Law Professor at the University of Nevada, Reno and Truckee Meadows Community College.